Another casualty of The Tail-less One. 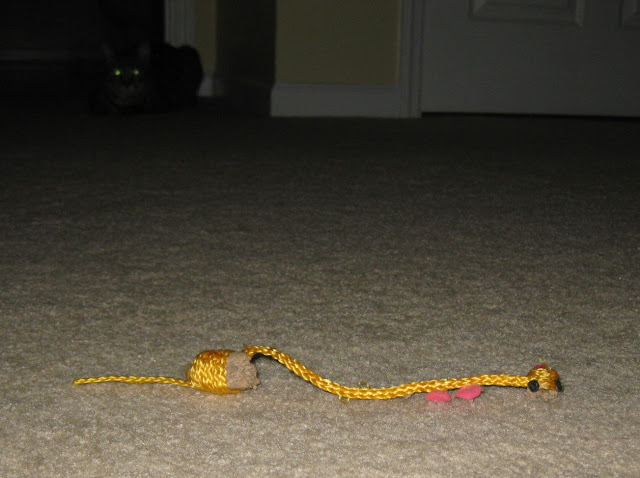 Posted by Madness, Trouble, Squish and Milkbone at 6:00 AM 5 comments:

Our Easy like Sunday turned into Time-out Sunday for Milkbone and Madness up in a tree. During the past week Milkbone has been a good cat, not chasing anybody, but apparently  it was too much to ask for him to keep that up for the entire weekend. 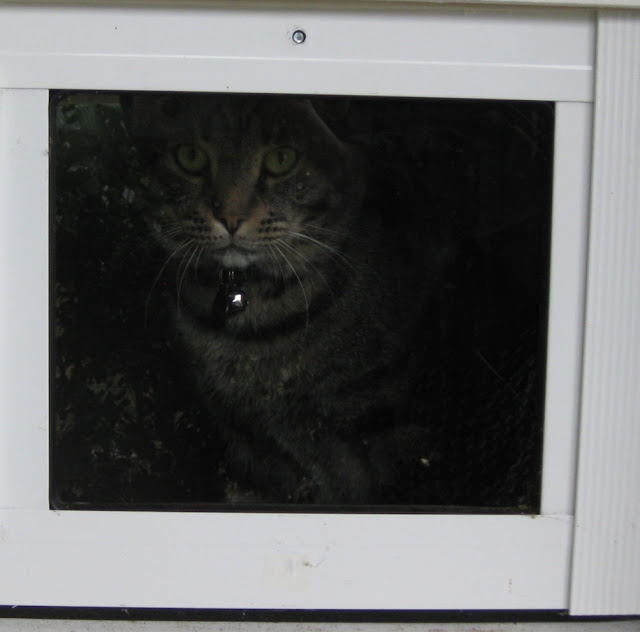 Don't worry, Madness is fine. She just got a bit of a scare. *sigh* Why can't everybody just get along!
Posted by Madness, Trouble, Squish and Milkbone at 9:48 AM 8 comments:

Milkbone and Trouble taking a nap on the couch. We've had a couple of cool days, so the snuggling has begun. 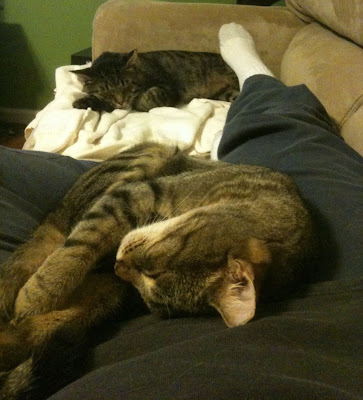 Don't be fooled by how innocent Milkbone looks here. He had to go for a time-out earlier since the chased Squish. Now he puts on an innocent act for some sympathy.
Posted by Madness, Trouble, Squish and Milkbone at 8:46 PM 6 comments:

I continued to feed Mr. Mean, but was very careful not to touch him. Then one day, he head-bumped my hand when I was putting out the food. I carefully petted his head ... and he loved it! It was then that I realized that he was not feral at all. He loved being petted, but soon it became a problem, cause he wanted to come into the house! And he still wanted to eat all my cats.

After Bubbles passed away, I spent a bit more time with him and decided to open the window to my office (it opens on the porch) to see whether he would like to come inside. He promptly jumped in and showed no sign that he ever planned to leave again! All the stray cats I've taken in before, wanted to still go outside all the time. Not so Mr. Mean. I got him a large doggy pillow and he seemed perfectly content to lounge on it for the majority of the time 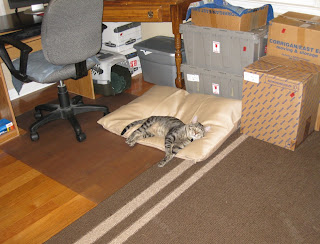 Because of his love for this pillow I started calling him Milkbone. 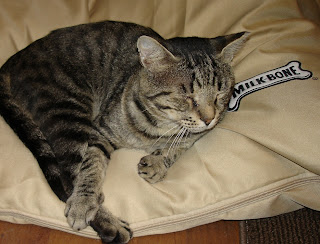 A couple of weeks ago I put a kitty door in the window so he can go out when he likes. He seems pretty content to be inside, but since I cannot let him come into the rest of the house, he gets a bit lonely in the office. Eventually I got a pet gate to separate the office, the guest bedroom and bathroom from the rest of the house. This allows him more space when I don't have guests and he can also see what it going on in the downstairs part of the house. 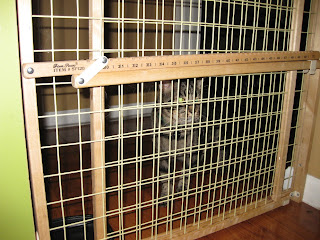 He looks kinda sad behind the gate, but unfortunately he still sees my cats as potential snacks, particularly Squish. He really looks at her as if he wants to hunt her and she is terrified of him. I suspect the absence of a tail and her funny bunny-hop way of trotting around the house is the reason for his interest. Does this behind look tasty? 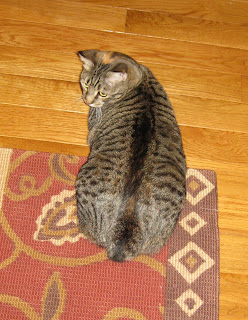 I've never had to deal with cats in my household that don't get along. Everybody seem relatively content, although Milkbone is a big cuddler and wants to spend more time with me. Don't feel too sorry for him, he does get to sit on the couch with me when I watch TV. He has to wear a harness, so I can keep him close, but he seems to be OK with it. 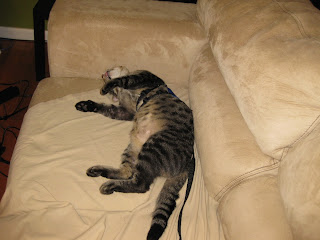 He is a very good cat. He learned very quickly what he is allowed to do (brow, brow for play) and what not (jumping over the barrier). I'm not sure how all of this will work out in the long term, but for now everybody seem relatively happy. It makes me sad to think that such a nice cat, who obviously had a home at some stage, had to live outside all this time. 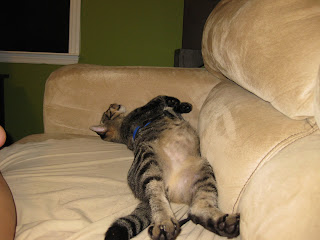 Posted by Madness, Trouble, Squish and Milkbone at 5:30 AM 9 comments: