Hello Internets. We here in Baton Rouge are just watching the Weather Channel and preparing for Gustav. This is the current projection. 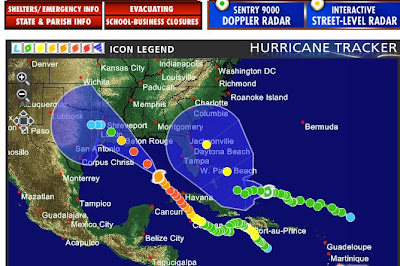 This is what the weather looked like this morning in the direction of New Orleans. 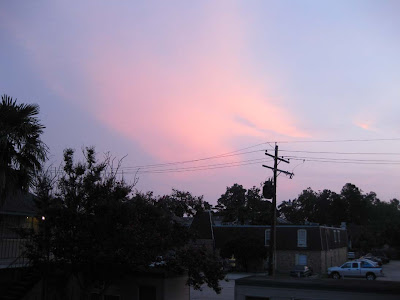 We had no serious damage during Katrina or Rita, we just lost electricity for about a week every time. So we hope it will be about the same this time. I will post more pictures during the storm if the electricity and internet stays on.
Posted by Madness, Trouble, Squish and Milkbone at 11:50 AM 19 comments: 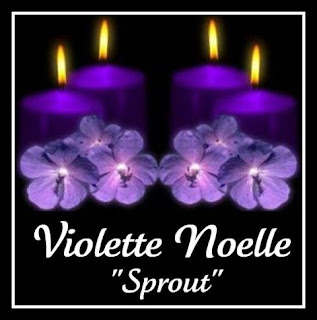 Years ago there was a National Geographic special about cats, called "The Secret Life of Cats". During the intro to the program this is the question they asked: "It's 8 pm. Do you know where your kitty is?"

About a week ago I woke up to Madness and Bubbles growling. They were looking through my window, so I got up to see what it was. Outside I saw a ginger cat sitting and looking at them. I've never seen this cat around here before and it just hung out in front of my apartment for quite some time.

Eventually I got up and took some food outside. It ran down the stairs, but returned to eat the food once I went back inside. So a few days later, I saw a sign close to my apartment about a missing orange cat. I called the number and the people said they moved away, but I should send them a picture and if it is their cat they will arrange to get it to them. Unfortunately the cat only comes by at night and runs away when I go outside, so I had a lot of trouble getting a picture.

So naturally, the geek in me decided: Motion detection camera!

So I set up a cheapo wildlife camera and here is what I got. 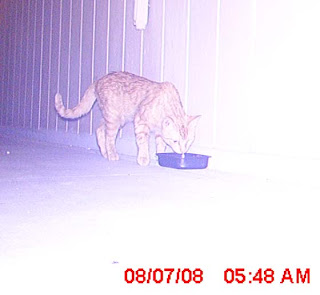 Unfortunately it turns out that this was not the missing orange cat that the owners were looking for. In any case I set up the camera again last night in the hope to get a better picture and I got: Another cat! 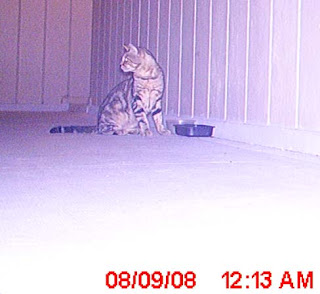 And a little later this cat. Remember him? 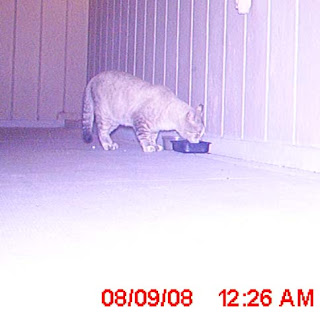 And eventually the ginger showed up also. 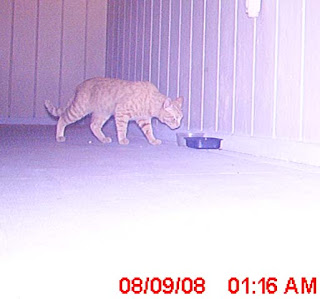 It's amazing how the other two found out so quickly that I put out out some food! I don't usually put out food right at my apartment (the landlord and some tenants complain about it), but I guess I'll continue to feed them until I move away at the end of September. Anybody want a stray kitty? Or three?
Posted by Madness, Trouble, Squish and Milkbone at 4:38 PM 9 comments:

I know Mom likes to post cute pictures of me, but I'm a very fierce Mancat. Just look at my muscles as I climb this tree! Here is a close-up. I hope the lady cats don't faint. Posted by Madness, Trouble, Squish and Milkbone at 7:15 AM 13 comments: