Yesterday, my neighbors dumped a little kitten on my doorstep! Everybody in the neighborhood knows I have cats since they often see me outside playing with them. They knocked on my door and when I opened they said they found this kitten and their Grandmother told them that they could not keep it and that they should give it to me!

These neighbors had 2 cats when I originally moved in, neither sterilized. The female had kittens and when they were about 8 weeks old they (including the mother) disappeared. When I asked about them, they said they gave her and the kittens away. The male cat got into a fight, had huge wounds on it which became infected and he died. In both these cases I tried to talk them into getting the cats sterilized and taking the male to the vet. Their excuse was always that they did not have money, even though I found a low cost spay and neuter facility and gave them all the information. The mother cat was also extremely thin and constantly ran into my house to eat food. She seemed extremely underfed.

If I thought that there was any chance that they would look after this kitten I would have just taken it back to the grandmother and told them to look after it themselves, but I was unsure about whether they would not just dump it in the woods somewhere.

In any case, I already have 4 cats and my landlord has been very lenient with letting me keep Trouble and Squishy. However she put her food down now (understandably) and I cannot keep this kitten.

I guess she is about 4-5 weeks old. She eats on her own and even uses the tiny litterbox I put down for her. I havn't taken her to the vet yet, but she appears to be healthy, no runny eyes or scabby skin or anything. She is tame and very playful.

If you or your friends are in the market for a new kitty, please consider her. I live in Georgia and will deliver her within reasonable distance.

At the moment I'm calling her Hobbit, because she has huge hairy feet!

UPDATE: I have already called about 7 no-kill shelters in my area and they are all full. The local Humane Society only takes animals from high-kill shelters, not the public. The animal control for my county does not even take in any cats - yes hard to believe, but true. 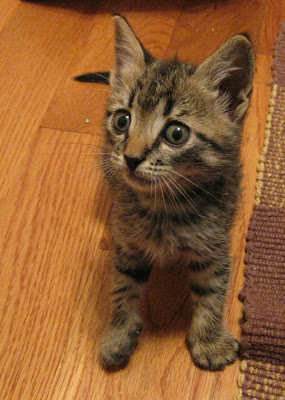 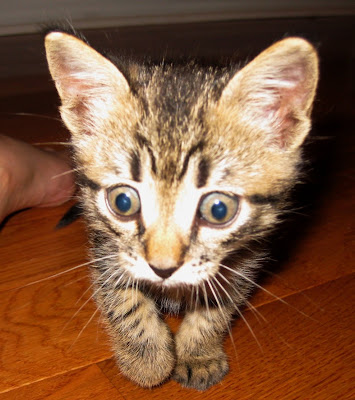 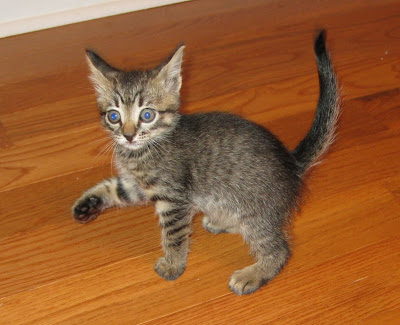 Posted by Madness, Trouble, Squish and Milkbone at 9:43 AM

Good luck! Are there no kill shelters in the area that will list her for local people as well?

We hope that you find a kind family that will take her - she is a pretty kitten.

Hobbit is a sweetie, and so are you for trying to find her a great home. Will share this around!

our local animal control does not take in cats either. all cats are taken to the local spca. hobbit is so cute. i wish we could take her in but 3 cats and 3 dogs are my husbands limit. hobbit reminds me so much of tt when she was a little sweetie. we will be purraying for someone to open their hearts and home and take little hobbit in.

We hope Hobbit finds a home. Have you asked the vet if they can help find a home for her.