The Story of Mrs. B - Part Four

After her death, I missed Kalahari a lot. I just moved to the about 6 months earlier and my apartment felt very empty after she was gone. So I decided to adopt another cat. I went to PetSmart and chose a beautiful young tabby cat (before Mrs. B all 5 my previous cats were tabbies). However, they would not let me adopt her because I was a foreigner (that is a whole other story, which I will not go into now). In any case, I was very sad about that and I told a colleague at work that I wanted to adopt a cat. She said that she knew of somebody that rescued cats. And that is how I heard about the Nice Lady. I immediately contacted her and went to meet her. We talked a little bit and a few days later she brought Mrs. B (who they named Bobbi) over to my apartment to see whether we liked each other. Well, she never left and 5 years later we are still living happily ever after. 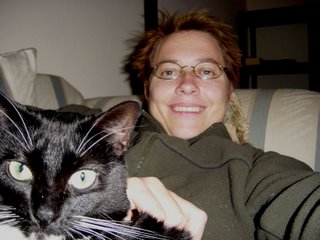 After all the high drama of her early life, Mrs. B now leads a blissfully dull life. The most excitement she has here is when she gets the water squirt ‘cause she slips out into the courtyard for a grass salad. To conclude the Story of Mrs. B here is a picture of her watching here favorite program on Animal Planet, Meerkat Manor. Life is good. 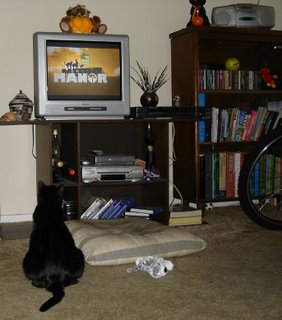 (The End)
Posted by Madness, Trouble, Squish and Milkbone at 1:40 PM

Mrs. B I'm glad that you have a dull life now! I think a dull life is ever so much better.

[applauding] Great story with a happy ending, even if it's dull. ;) You got the good life now Mrs. B! I love Meerkat Manor too!

Memories of Eric and Flynn said...

Mrs.B yoo's efurr so lucky that yoo got such a nice furrefurr home. yoo mite be leading a kwiet life now, but I bet it's not reely dull. Ennyways "Meerkat Manor" prolly is furry citing.

I'm glad yu fownd a permanent furever home and can lead a dull but SAFE life.

Life is good, isn't it Mrs. B? We're glad that you and Cecelia matched up for life.

great story! we like the "happily effur after" endings. purrrrrrs!

Great story! Mrs. B is gorgeous and obviously enjoying her life now!

Sounds like you and Mrs. B. are a purrfect match!

Oh Mrs.B we's is so glad dat yu have a dull life now. Life in da fast lane is not so much fun! It's much better being in a gud home wif a nice Momma, isn't it?

What a great ending to a great story! Mrs. B and Cecilia were meant to be together.

What a nice story! I'm feeling all emotional now.

ah, meerkat manor, a favorite in my apartment too. once in a while tigerlily will stand up on her hind legs like a meerkat and it just kills!
mrs. b has a wonderful story, thank you for sharing it with us!

We luv yer story and we luv the way yoo sepurated it into parts. We feel like we know yoo vary vary well now, Mrs. B!!!

I reely luvd reeding the storey of Mrs. B. It was rivitting. I thot I'd like watching Meercat Manor, but too many meercats got eeten, so we don't watch anymore.