The Story of Mrs. B - Part One
The Lady that saved Mrs. B (we will just call her the Nice Lady) was kind enough to write me a long e-mail telling me the story of how Mrs. B came to her and everything she went though before she came to live with me. So without further ado, here is the story of Mrs. B. 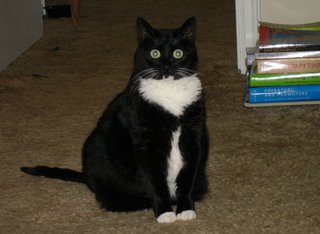 Some neighbors of the Nice Lady saw Mrs. B in their yard. She was disoriented and weak so they took her to the Nice Lady since they knew she helped kitties in need.

We don’t know anything about Mrs. B before this. The vet estimated that she was about 2 years old when she was found. From my time with her I’m sure she was somebody’s pet. She does like to go outside to eat grass, but she is not very outdoor savvy. She gets spooked easily outside, so I think she must have been a predominantly indoor cat.

In any case, when they found her, she had extremely bad diarrhea and was very dehydrated. Since it was a weekend the Nice Lady’s normal vet was closed, so she took her to another vet. They ran some tests and said she was FIV positive and should be put to sleep. The Nice Lady did not agree, but they were adamant that she needed to be euthanized.

Oh wow! The Nice Lady doesn't give up I bet. Poor Mrs. B having the diarrhea, that really stinks- I would know!

It's horrible that someone would just leave you out there to be ill and potentially die, not to mention potentially affect other cats! Whatever happened before Mrs. B?

Um, what's youth-an-eyesed? - Victor
It means put to sleep. Not like when we snuggle, but when the cat doesn't wake up again. - Mom
Oh no! They was gonna do that just fur dyeareea an FIV??? That's AWFUL! Tell me they didn't do that to her. - Victor
Victor, think about it. You know Mrs. B is just fine, in a wonderful home with Bubbles and Cecilia. - Mom
Oh, yea! Good. I like a happy endin. Can we snuggle now? -Victor

Lovely picture of you Mrs. B!

Thank goodness the Nice Lady did not listen to the v-e-t!

Oh Mrs. B, I'm so glad the Nice Lady didn't listen to the vet. I am FIV positive too (my mommy and daddy founded me when I was approx 2 years old as well) and here I am, just turned four and am a perfectly wunderful kitty.
Until my ear thingies last month, I hadn't been sick in over a year!!!!
That is a great picture of you and I can't wait to hear the rest of the story. You aren't going to make us wait a week are you????

PS my mommy if finally catching up on updating my links. So, yous are there!!!

Ohhh, that is a scary cliffhanger to leave the story on. But at least we know it has a happy ending, right? Mrs. B. certainly looks like one happy fat cat now!

What a nice story - thank goodness for nice beans!

Ya can't jus stops there!!!!! Ya gots to keep goin an us what happened!

Mrs. B's story didn't waste any time in getting interesting. Can't wait for the next chapter.

Must. Have. More. Story! what a horrybull vet ta wanna put sweet Mrs. B ta sleep just cause of that! an maybe she was abandoned cause she was sick - how sad.

omigoodness! And I thought MY story was bad!

I can't wait to hear the rest of the story, but I am also very happy to know the story ends well!

I'm sure yoo wuld have fownd sume nice youths-in-Asia to take care of yoo but were so happy yoo didnt go off to youths-in-asia and stayed here instead.

Good fortune was smiling on Mrs. B. Most abandoned kitties aren't so lucky.

Owr frend Babe, hoo is gramma's kitty, is FIV pozitiv, and it's likely that sumwun dumped/abandund him win they fownd that owt, wich is how he ended up livving with gramma. But Babe was not yoothinized and he's the sweetest cat, ever. It's nice to heer storeys that let peeple know that FIV is not an immediyut deth sentinse.